Chief Emeka Charles Kalu, a chieftain of the Peoples Democratic Party (PDP), is the National Coordinator, Peoples Democratic Party Coalition (PDPCO) as well as Director-General, Global Initiative for Good Governance (GIGG). Dr Kalu, former governorship candidate in Abia State, in this interview with OHAFIA-TV News, spoke on the consultations going on among the party’s presidential aspirants, why the party should zone presidential position to South East, even as he expressed optimism that Nigeria would be better if PDP returns to power. He also spoke on other issues. Excerpt

How do you see the large number of presidential aspirants that have emerged from the South so far?

Well! I will say it is encouraging, it is a sign that all our spirited efforts at creating awareness are working, it is prove that the political consciousness of the South has been awakened to the reality that it is only when you show your readiness to compete that your competitors may take you seriously. That is the right thing to do to match contenders from the North. We cannot continue to sit on the fence on matters relating to Nigeria, our collective project. So let more candidates come up and show interest in the contest, they are welcome.

How do you think the ongoing consultations among the PDP presidential aspirants?

As you can see, the 2023 elections are going to be remarkable, it is going to be intriguing because it has opened doors to many possibilities to the extent that certain happenstances that wouldn’t have been envisaged as possible are playing out before us. To me, it is a good thing because the only way we can get different results as people is to do things differently.

One of the feats that will be achieved through this consultation is the emergence of a formidable force that will pursue the interest of the South as one strong pack that cannot be pushed aside or tossed by the wind of political intrigues of 2023.

Secondly, if they succeed in selecting one saleable candidate and cueing behind him, the political “divide to conquer” of the North against the South will not come to fruition as they will be contesting a people United in purpose to drive home their demand. I, therefore, encourage the aspirants to be ready to sacrifice their ambition for the greater good of the people by accepting and supporting anyone chosen among them as this will be an incontrovertible step to a successful outing of the South in 2023.

It has been your view that your party, PDP should zone its presidential slot to the South East. Do you think that doing otherwise will negatively affect the party’s chances in the election proper?

Of course! It will affect it and I am sure the other parties will not hesitate to do the same if PDP tow that line.
But come to think of it, Southeasterners have sacrificed a lot to the growth and sustenance of the party, therefore it will not be out of place to expect PDP to show solidarity to the Southeast region that has sacrificed much to her growth and unity from day one.

Another factor is the issue of agitations that started as a result of institutionalized marginalisation of the Southeasterners, (at least as perceived). I am sure that a Nigerian President of Igbo extraction will calm frayed nerves who believe that somehow, the civil war of 1967-1970 has not ended as a result of a skewed way of handling leadership in Nigeria.

So if PDP is magnanimous enough to understand the dynamics behind the question and zone the presidency to the Southeast, they would have helped to solve one of the evils tearing Nigeria apart as a nation.

Among those who have made declarations so far, who and who do you think should be best pairs for the position of president and vice president?

I think that one is a decision that can be handled only by the party’s leadership as that is their only selling point to win. If you want to win as a party, you must present your very best to win.
I think all the candidates are qualified and ready, let the parties field the best they can.

How do you see the division in the APC over the candidacy of former Governor Bola Tinubu and Vice President Yemi Osinbajo?

It is a normal political condition, what makes the difference is the ability of the opposing interests to have a common ground to rectify and understand the implications of dividing themselves due to personal ego at the expense of the party as a whole. In the end, the people will have their way because they reserve the power to choose.

What is your party doing to ensure that women and youths are given better chance for electoral positions?

It is a known fact that my party, the Peoples Democratic Party, PDP is a party that gave a lot of opportunities to women and youths, especially during the last phases of GEJ, even from OBJ who gathered a lot of professional women like Dora Akunyili, Okonjo-Iwuala, Ezekwesili, etc. These women played a lot of roles to ensure Nigeria was on the path to the fastest growing economy in Africa and nearly a debt-free nation until we fell back to the stone age. There is no doubt everything will be done to increase this chance because it is going to be one of the tools that will bring this nation back on its feet. Trust me, PDP is a pragmatic and proactive party that believed in dotting the “I”s and crossing the “T”s. By the time we retake the centre, Nigeria will experience a fresh and unprecedented turnaround in all facets of her national life.

As a PDP chieftain from Abia North which is believed to produce the next governor, how do you see the number of aspirants from there?

I have not been on the ground for a while as I was away from the country, but I am back now, I will study the recent political developments before I could profer a befitting answer to this question.

But that notwithstanding, the right thing to do in the spirit of “Abia Charter of Equity” is for power to rotate back to Abia North Senatorial Zone in 2023 to continue to maintain balance and keep Abia at peace. This was the principle that brought Okezie Ikpeazu, PhD, to power almost from nowhere. Anyone or party that tries to change the status quo may lose popularity in this zone and possibly create unhealthy competition that will truncate our peaceful co-existence as God’s State.

When will you make your declaration and for what position? What will be your agenda for the people if at last, you decide to join the race?

My agenda for my people have always been an open book, to improve their lives by all means I could. One of my major agendas has been that of creating higher political consciousness to engender healthy political competition for improved life and better Democratic dividends. This is a conscious and concerted effort that is yielding dividends even when I am not in any elective office, I will not relent on it irrespective of where I found myself.

As for declaring for a position, I already stated that I have been away for a while, political contest is not a race you leap before looking, No! “You look before you leap”. Having said that, I am fully on the ground now. I assure you that whatever becomes my final decision on contesting after consulting, you will be the first to know. 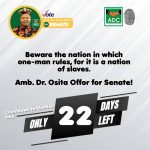 22 Days To National Assembly Elections: Amb. Dr. Osita Offor (Ultimate Commander) Blasts Senator OUK For Failure To Attend The Abia North Senatorial Debate; Saying We Should Beware Of A Nation In Which One Man Rules, For It Is A Nation Of Slaves. 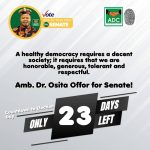 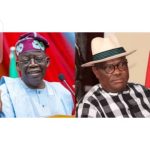 2023 Presidency: PDP Looking For Excuse To Avoid Rally In Rivers. But They Must Do It By Force – Wike

Breaking News:
Abia PDP Guber Primaries will hold on the 4th of February 2023.

Daniel Imo vows to use his experiences, contacts, to resuscitate Arochukwu/Ohafia healthcare system

LANCASTER – COMING WITH THE KEY OF ABIA REDEMPTION

We are buying Twitter from Elon musk – Cubana Chief Priest

This process has nudged me back from the ledge of self-loathing, especially where photos are concerned. Going forward in my life necessitates being seen in person, on paper, and perhaps even in some forms of media.

22 Days To National Assembly Elections: Amb. Dr. Osita Offor (Ultimate Commander) Blasts Senator OUK For Failure To Attend The Abia North Senatorial Debate; Saying We Should Beware Of A Nation In Which One Man Rules, For It Is A Nation Of Slaves.

2023 Presidency: PDP Looking For Excuse To Avoid Rally In Rivers. But They Must Do It By Force – Wike